UK ad tech start-up Admedo recorded 198 percent growth in revenue during 2017, despite scepticism in the Venture Capitalist market around ad tech, and in a period where advertising giants Google and Facebook hoovered up 84 percent of global spending on digital advertising.

The London-based company, which was founded by Nick Moutter and Laura Bowen in 2013, has raised £7 million in funding to date from investors that include Sussex Place Ventures, MMC and Fuel Ventures.

Previously focused on growth, Admedo’s goal shifted to profitability in 2017 through transitioning more into the direct advertiser market, enabling brands and advertisers to bring their programmatic buying in-house with ease and in a transparent manner. Having been named in The Fresh Business Thinking Shift 100 in association with KPMG last year, which celebrated marketing and advertising entrepreneurs who were reinventing advertising and marketing, Admedo believes data is the key for advertisers and media owners.

“In order to realise the full potential of programmatic advertising, brands must be able to harness their first-party data. We have incorporated into our programmatic suite the ability for brands to dynamically build audiences through the creation of custom segments which allows them to develop highly creative and granular targeting strategies.” chief executive officer Nick Moutter explained. 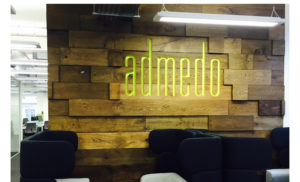 Over the last year, Admedo has built an impressive client roster, including Monster, Hotcourses Group, Robert Half, MotoDirect Digital and many more. The innovative start-up has expanded their core offering across all sectors, to include travel, retail, hospitality and now cryptocurrencies. Admedo’s product is transforming how programmatic advertising is realised internationally too, gaining traction through reseller relationships.

As the only fully transparent programmatic stack, Admedo’s success comes at a time when the industry is being shaken up, with notable marketing executives such as Keith Weed and Marc Pritchard speaking out about opaque practices and murky supply chains.

WPP has seen share prices fall by more than seven percent. Whilst the blame is being placed on “tepid” macro environments, the shift in advertisers moving away from agencies on a wider scale can’t be overlooked. A recent ANA Report shows 35% of brands are moving their programmatic accounts away from media agency partners with lack of transparency as the main motivator.

“There is a clear need for the ad tech sector to become simplified and accessible which is why marketers are closing the programmatic skills gap to bring their technology in-house and place the focus on marketing technology. Martech already accounts for a hefty 22% of marketing budgets. Our strategy has always been to empower advertisers and put the control back into their hands. Our fully unified technology stack provides brands with all the tools they need in one UI and at one cost, which they can seamlessly bring in-house. Customers have a totally customisable platform at their fingertips and are even able to leverage our access to multiple vendors to fit to their business needs,” he added.